Everything You Need to Know About Anjuna Goa

Anjuna beach is one of the most popular beaches in North Goa, located between Baga beach in the north and Ozran beach, which is also called Little Vagator Beach in the south. This was one of the first beaches in Goa to become popular, thanks to the hippie culture of the 1960s and the 1970s. It is now a favorite with many backpackers coming from Europe. However, Anjuna is popular with the Indians too. Many stay close to the beach, while others are day visitors. The beach is particularly popular with backpackers, and long-stayers. Tourists come to Anjuna beach to watch a glorious sunset over the Arabian Sea as well.

Anjuna is 22.2 kilometers from Panaji, Goa’s state capital via the NH 66. The beach is 46 kilometers from Vasco da Gama. The closest railway station is Thivim, which is 19.3 kilometers from the beach. Anjuna is a somewhat different beach than the others in North Goa. Unlike the others, Anjuna is less sandy. Some stretches are even rocky. You will find many rocky outcrops here. There are many picturesque red laterite rocks here, which is why it is sometimes referred to as the Rocky Beach. The red colored laterite rocks are the real jewels of Anjuna, giving the landscape its unique flavor.

There are many shacks, bars, restaurants, and cafes. You will also find hotels, resorts, guest houses, and villas. Recliners and umbrellas are right on the beach, but it does not get as crowded as the other busy North Goa beaches in the winter months – Baga, Candolim, and Calangute. There is a heady beach party scene here, in the peak tourist season. There are plenty of nightclubs too. Anjuna is known for its rave and trance parties. The Wednesday flea market at Anjuna is the biggest and most famous in Goa. It is a must visit.

Historian Teresa Albuquerque says that the name Anjuna comes from the Arabic word “Hanjuman”, which means “merchant guild”. But others are of the opinion that Anjuna stands for “change” in the Arabic language. This is because, Arabs used to arrive by the sea route, and changed their money here. 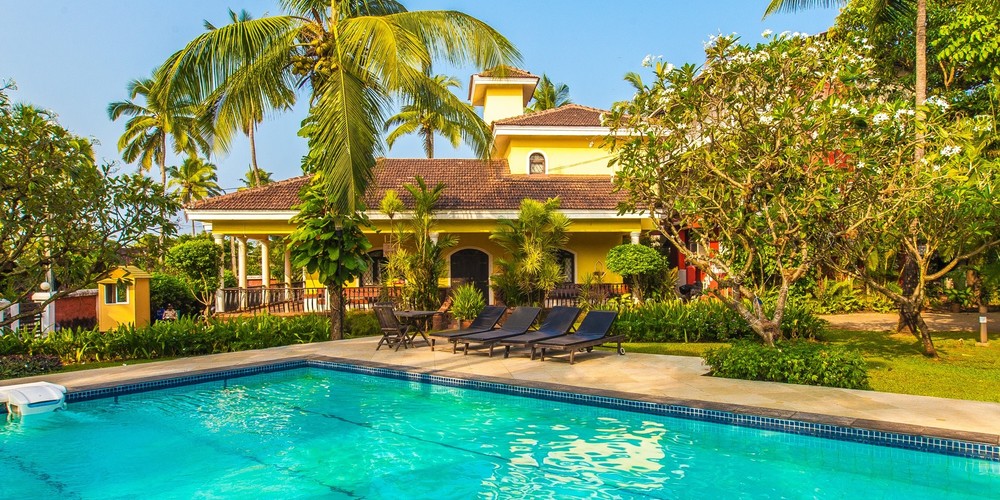 Luxury villa with direct access to the beach. 5* star service. Prime location of North Goa.
Villa for rent from 19 000 Rs. per night

Best Time Of The Year To Visit Anjuna Beach

Anjuna is one of the most popular Goa beaches, so you will find tourists throughout the year. However, most tourists come here between November and February, the winter months. This is the best time to visit the beach. Very nice weather! The shacks are all open. Parties! Water sports! Most shacks will be closed at other times, and you won’t find water sports as well. Expect more people in December and January. November or February is better for those who don’t want so many tourists.

The summer (March, April, May) is hot here, like elsewhere in Goa. The daytime temperature can reach 36°C on some days. It can rain on a few days, but it is nothing like the showers of monsoon. June, July, and August are the wettest months. Chance of thundershowers on some days! High humidity! Golden sunshine between rains when there is no cloud cover. Expect high waves and choppy sea in the monsoon.

The winter is very pleasant at Anjuna. Long hours of sunshine with almost no rain, so you can relax on your sun bed at the shack. Perfect for hiring a car/bike to explore Goa and see the famous places. Low heat and humidity!

How To Reach Anjuna

Top 6 Things To See And Do At Anjuna 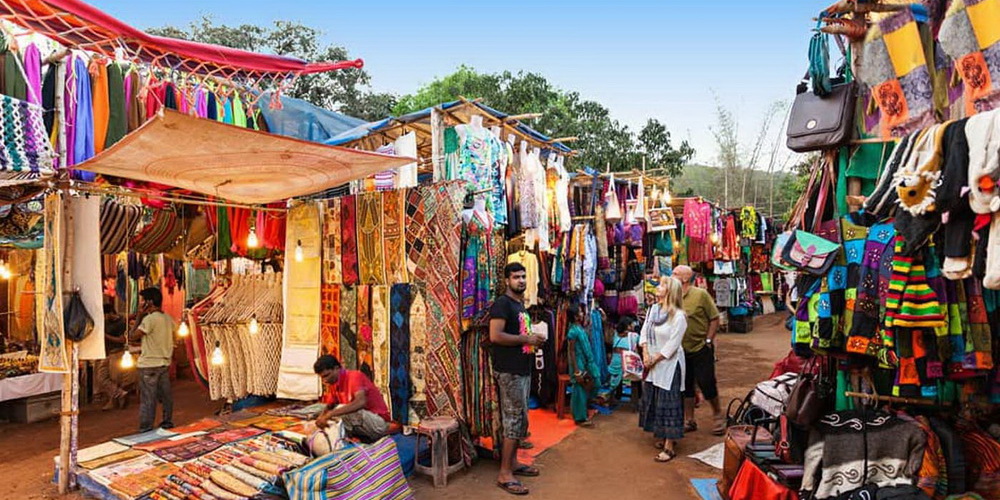 There are two weekly markets in Anjuna. The Saturday Night Market is at Arpora, but it is Anjuna’s Wednesday flea market, which is the most popular. The Anguna flea market was started by the hippies to exchange goods, so that they could fund their stay. It is much more mainstream now, but you can still find many exotic things here, including handicrafts, handmade jewelry, Kashmiri and Tibetan goods, bags, clothing, tribal artifacts, and much more.

There are plenty of stalls here, from the beach to the Anjuna Junction road. Many stalls sell the same things, so you should negotiate. There are a few bars and restaurants too with live music. Bands play jazz, rock, and music from other genres. Indian tourists, westerners, and backpackers – everyone comes to the Anjuna flea market. It is a must-do for the Goa experience.

During the day, Anjuna is a laid-back place with Indian and foreign tourists seen relaxing on the beach, except around the flea market area. But it comes to life in the evening, with the party scene hotting up. At Anjuna, you will see both outdoor and indoor trance parties. Between November and February, they are held almost every night. There are also full-moon parties here.

The top nightclubs in Anjuna – You will find hotels, resorts, hostels, and guest houses in all budgets at Anjuna. In general, the prices are lower than many other places in Goa. Many, especially the backpackers prefer to stay for the long-term here, and prefer cheaper accommodation at guest houses and hostels. The most expensive properties are the Yogamagic Eco Retreat Resort Hotel and Lotus Inn Hotel.

Villa Marbel Suite, Villa Casa Anjuna, Apartment La Premier, Villa Casa Madera, Vera Rosa, and Purple Mango are just a few of the top luxury villas in Anjuna. You can choose from many top-end premium apartments and luxury villas in Anjuna at our website. The villas are equipped for comfort while being cost-effective. Enjoy complete privacy with your friends or family.

* The price depends on the location, the season, and the duration of your stay.