India considers the Bengal tiger its national animal. Nonetheless, the striped predator is listed as an endangered species. Intensive destruction led to the fact that of 40 000 individuals living in the Indian jungle in the early twentieth century, in the mid-70s it was less than 1800 . Then the combined efforts of government and environmental organizations began "Operation Tiger " in order to save tigers in Southeast Asia. By the beginning of the XXI century in India already 22 tiger reserves existed. One of them, Mahadeyi Wildlife Sanctuary, located in the territory of Goa, covering an area of ​​approximately 208 km ² in the north- eastern part of the state, lies in the foothills of the Western Ghats. Currently, the total number of tigers in India is between 3,500 to 4,700 individuals according to official information from the State Department of Forestry. 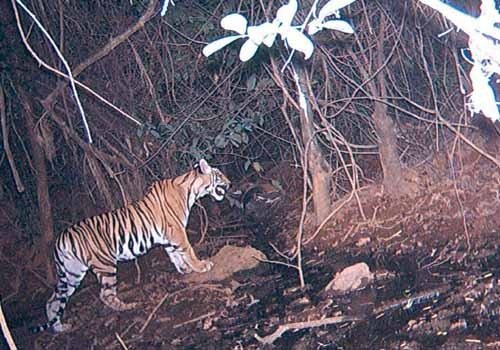 Many share the opinion that the Indian authorities are exaggerating on the number of tigers in the country with a view to provide the public with more than acceptable results. Quite often you can hear the statement that in Goa there are no free living tigers. Therefore, tourists are usually taken to the tiger reserve in the neighboring state of Maharashtra. But wildlife enthusiasts already appeared with irrefutable proof that tigers in Goa have not disappeared and reserve Mahadev really with its name as a tiger corridor. In April 2013 forest ministers recorded a Bengal tiger moving through the jungle at night with his camera. The presence of tigers has also been reported by farmers from the vicinity of the reserve. They tell the curious case of how you saw one in an irrigation canal and no water went up the river and in search of it he was surprised. And there they lay waiting for an even bigger surprise — the tiger lying in the channel, blocking the path of the water body. Farmers were frightened, immediately leaving the scene. A little later foresters found a half-eaten carcass of wild boar that finally convinced them that they were in the presence of a tiger in the area. Tigers are loving the spring period, so there is every reason to believe that cameras filmed an instance and it proves that it does not live there alone.

The Goa government has adopted a program for the further development of the reserve, according to which for four years (2013-2017) in the Western Ghat cameras will be placed in order to determine the movement and the number of tigers. A ban has recently been released and established in 2012 on visits to places of tigers. Now 20 % of the tiger reserves are open to tourists, but subject to stringent rules to protect the peace and comfort of wild animals. The flow of visitors is regulated by local authorities, and the construction of any tourist facilities is prohibited.

Bengal tiger — extremely strong predator, capable to win over animals twice larger than itself. It is considered the king of the jungle, all the animals are afraid of him, except for the elephants, with whom tigers form a relationship of mutual respect and do not invade each others "personal" territory.

The Bengal tiger is active day and night, hunting wild boars, monkeys, buffaloes, deer. On the day it can eat up to 40 pounds of meat.

More about natural attractions in Goa:

In Goa with Children -Entertainment