The Blue Lagoon in the arms of Arabian Sea

Cola beach is in the Canacona region of South Goa, 31.1 kilometers from Margao by the MDR41 and the MDR49. It is 9.6 kilometers from Agonda beach, another popular destination for tourists in the south, and 15.7 kilometers from Palolem, which is further south. The Cola beach is 9.8 kilometers south of the Cabo de Rama fort. Cola is one of the hidden beaches in Goa, a marvel of nature that is still undiscovered by most tourists. It remains secluded throughout the year. This is a perfect place for a nice, relaxing holiday in Goa. Cola is a perfect choice to escape from the crowded beaches and the hustle and bustle of city life.

The beach is lined with trees and hills, especially in the north and south. There is nature all around. There are some rocky outcrops in the middle. The beach is actually divided into two parts – North Cola, and South Cola, with a small hill separating the two. North Cola beach is 800 meters long, while South Cola at 145 meters is much smaller. There is a small river (khola) that creates a lagoon in the northern side, which is why Cola beach is often referred to as Khola beach.

The river and its lagoon gives Cola beach a unique landscape, different from most other beaches in Goa. There are very few hotels and accommodation options here, and only a few beach shacks, keeping Cola’s serenity intact. With so few tourists, the beach is always very clean. The water too is pristinely beautiful.

Cola beach was ranked as one of India’s top 25 beaches in TripAdvisor Travelers’ Choice® awards in 2016. In 2018 again, TripAdvisor ranked Cola as India’s 12th most beautiful beach.

You can visit Cola beach throughout the year, but the best will be between November and February, when the weather is noticeably nicer. You will get long, sunny hours with little rain. Nice breeze comes in from the Arabian Sea. The humidity is low. All tourist facilities are open, including the beach shacks. The hotels and other types of accommodation are working at full capacity. 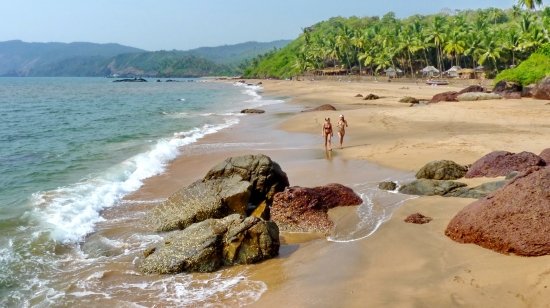 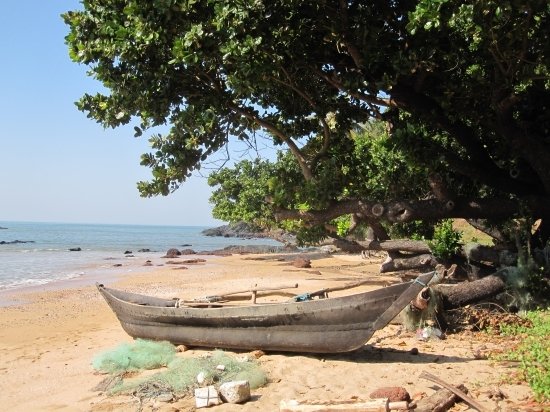 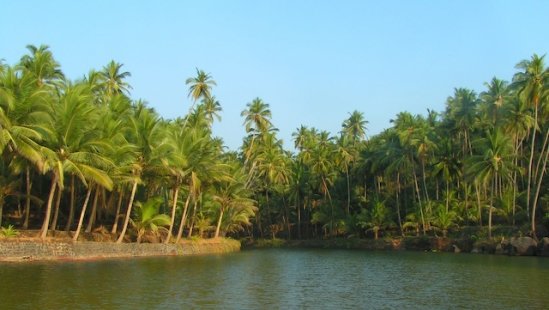 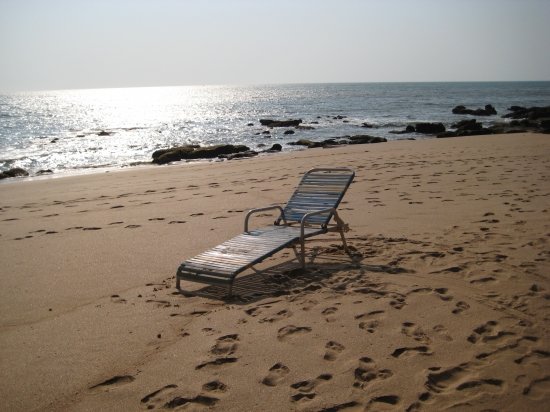 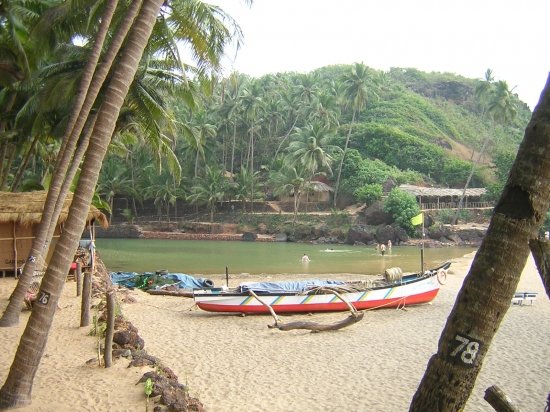 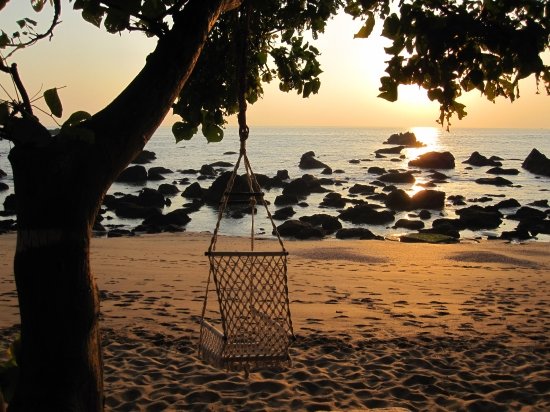 Summer in Cola and elsewhere in Goa lasts from early March to early June. The monsoon or rainy season is between the middle of June to early September. November to February is the cold season.

The summer is hot and humid. However, Cola is nicer compared to other places, because of the trees and greenery all around. Having said this, it will still be better to avoid direct sun exposure between 11 AM and 4 PM. The early mornings and late evenings are better. Expect heavy rain in the monsoon, with thundershowers on some days. The sea will be choppy. There are some rocks in the water, so swimming can be risky. There are no water sports anywhere in Goa during the monsoon season.

Tourists visit Cola beach throughout the year, but the winter is the best time. You can spend time on the beach, playing beach soccer or volleyball, or relaxing on a sun bed. The beach shacks are all open, serving food and drinks. The sun won’t beat down, even at noon. There is hardly any perspiration. Average temperature is between 31°C and 34°C in the winter. There is hardly any rain, so you can plan activities and visit places from the Cola beach.

How To Reach Cola Beach

Take the MDR49 from the south if you are visiting from Palolem, Agonda or Canacona. Cross Parvem and the Shantadurga hotel and you will reach Saleri. Now take the left turn here to enter the Cola Beach Road. There is a small indicator here to guide you. The Cola bus stand is also located here.

The road from here winds through slopes, hills, and trees. At the end there is a descent slope into the beach. Just before Cola, another road leaves to the right towards the Dharvalem beach. From Margao, you can reach the Cola beach by first taking the MDR41 and then the MDR49. Take the right turn from Cola bus stand.

Remember, there are no buses to the Cola beach. You have to hire a car or a bike to reach this beautiful beach. You need private transport.

Cola is a stunningly beautiful hidden beach in South Goa that very few tourists know of. This is so remote that it feels like a private beach. It remains hidden by thick vegetation, palm trees, and hilly terrain. The coconut trees that line its shore make it look beautiful. Cool and fresh breeze of the palm trees refreshes the mind. There are rice and paddy fields too. Cola looks beautiful from the top of a path that leads to the beach and through the trees.

There are actually two small bays here, which are separated by a small hill. You can climb to the top for an even more beautiful view of the surrounding areas. The smaller beach is sometimes called ‘Little Cola’. The sand is crisp and golden in color, and very pleasant for walking. It is much quieter and cleaner than most other Goa beaches, as there are very few tourists, even in the peak tourist season. This makes Cola a great place for a nice relaxing holiday. There is no nightlife here, but you can hold your own private party in complete privacy on the beach.

Rocks are strewn all over the beach, but they are mostly accumulated in the middle where the rocky outcrop juts out into the sea.

Swimming is relatively safe. But remember, the depth changes abruptly and there are also some rocks on the Arabian Sea bed. So it is best to stay close to the shore. In most times, there are no lifeguards on the beach.

Both the bays have their own private beach resort and hotel. There is a tented resort on the northern part of the beach. The shacks and restaurants on Cola beach are all owned by these resorts, so there are no conventional beach shacks here like the many other beaches in Goa.

The beach is good to visit in the winter season, between the months of November and February. The tourist infrastructure completely shuts down at other times of the year. At other times, you will probably find the beach completely isolated. You could even be the only person here.

The blue lagoon is the highlight of Cola beach. This is what distinguishes Cola from the other beaches of Goa. There is a small creek that comes out from the thick vegetation and meets the Arabian Sea here, but just before the confluence it forms a fresh water lagoon. Walk down the stairs from the Cola Beach Road and you will reach this lagoon. You can also approach the lagoon from the sea. In high tide, water from the sea comes rushing in through the sand. But at other times, a thin sand bar separates the lagoon and the sea.

The Cola beach is also referred to as Khola beach because of this river or creek. ‘Khola’ in local language means small creek. You can jump or dive into the lagoon and swim in its cool and fresh, sweet water. You can also do kayaking and fishing here. There are palm trees all around the lagoon, making it look very green and peaceful. It gives a serene vibe to be enjoyed. You can catch the rare sight of sea eagles, monkeys, and even the occasional dolphins in the sea. Just beside the lagoon, you will find the only place that serves drinks and food to day visitors in Cola.

There are only a few places to stay at Cola beach. There are no beach huts here or luxury star properties. You will find only bungalows and tents here. Blue Lagoon Resort Hotel, Soneka Cola Beach Hotel, and Dwarka Hotel are the best places to stay here. At the northern end of the beach, you will find tented accommodation in traditional Rajasthani tents. The tent resort also offers 3 wooden cottages within the trees and very close to the beach. Each tent can accommodate two people. There is an en-suite bathroom and verandah.