Mobor beach is in South Goa, next to the Cavelossim beach. It is part of the same stretch of sandy shoreline that runs all the way from just south of Vasco da Gama to the Sal River. The Mobor beach, which is 2 kilometers long, is its southernmost end. The Sal River meets the Arabian Sea here. It remains tranquil, clean, and beautiful throughout the year, even in the peak tourist season.

The Cavelossim beach has become very popular in recent years because of the two luxury resorts here – Holiday Inn Goa and The Leela. There are many day tourists here, which is why it is not that serene anymore. By contrast, hardly anyone knows about Mobor, though it is just a few minutes walking from Cavelossim. In fact, Mobor beach is the southern extension of the more popular Cavelossim.

It’s a different world. A long stretch of sand, lined by palm and casurina trees, with the Arabian Sea on the one side and the Sal River on the other. Mobor is a unique beach because it has water on three sides. It is one of the cleanest and most serene beaches in Goa, a place for complete relaxation and privacy.

There are only a few beach shacks here. The sea is safe for swimming. There are water sports on the sea, and river cruises in the Sal. There are bird watching and dolphin watching tours. You will find a few small hotels, guest houses, and luxury villas at Mobor, most of them beside the river, just minutes walking from the sea. 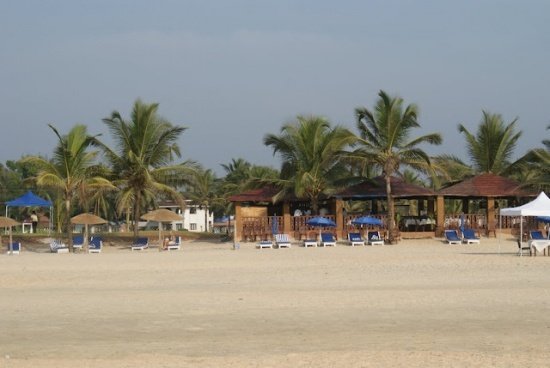 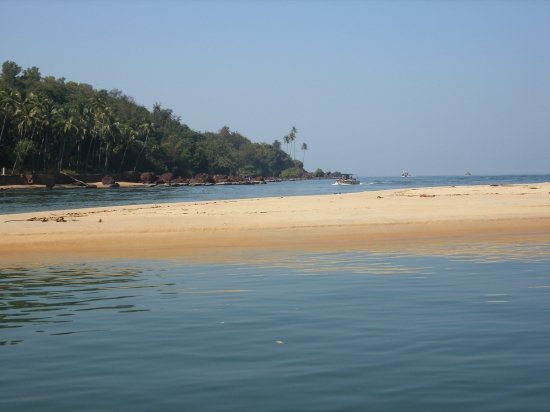 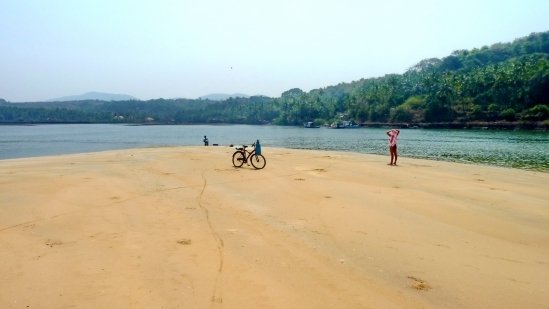 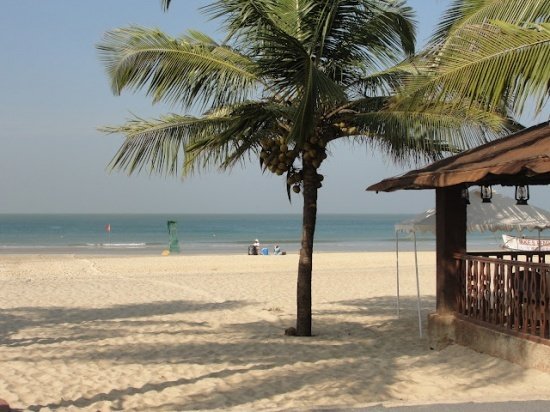 The beach and its surrounding areas has the status of a conserved area of national importance. There are ponds with blooming lilies, sandy dunes and coconut palms that grow directly on the beach. Sal River flows on the others side of the beach. Most of the locals are into fishing. The Cutbon Jetty immediately opposite of Mobor is one of the busiest fishing harbors of South Goa.

You can visit the beach throughout the year, but the best time would be the winter season between November and February. This is also the peak tourist season. The beach shacks and restaurants will be all open. There will be water sports. You can also go on a cruise during the winter months. You will also have a better chance of seeing dolphins. Besides, you can see a lot more birds as this is the migratory season.

There might be very little tourist infrastructure in the summer (March to May) and monsoon (June to August) months. The beach shacks will be closed. Most of them are temporary structures that come up only during the tourist season. You won’t get any water sports in the summer or monsoon months because of high winds and choppy sea.

The summer months are hot and humid. On some days, the daytime temperature can reach up to 36°C, and sometimes even higher. However, it will cool down considerably in the evening as a nice breeze comes in from the sea. Avoid during sunlight exposure, especially between 11 AM and 4 PM. Wear a sunscreen and cap if you have to go out. During the daytime, you can relax at your luxury villa and take a dip at your private swimming pool.

The winter is very pleasant. You will have long hours of sunshine, but the sun won’t burn your skin. January is usually the coldest month. But you won’t still need any winter wear as Goa never gets too cold.

This is a good time to relax on the beach. Just head to a beach shack, take a sun bed, and get that tan. Go under the umbrella if you need some protection. Of course, you can also lay down on the beach as well over a towel. The beach shacks, restaurants, and cafes will be all open. The water sports operators are also back on the beach. There are river cruises too.

By Air — Goa International Airport at Dabolim in Vasco da Gama is the closest airport. It is 37.9 kilometers from Mobor beach by the Dabolim-Cavelossim Road and MDR43. It is serviced by Air India, AirAsia, IndiGo, Qatar Airways, Rossiya Airlines, SpiceJet, Vistara, GoAir, Azur Air, and many other carriers. There are many charter flights in peak season. There are restaurants, shops, currency exchange counters, and even a spa at the airport. It can get a little crowded, though.

By Rail — The closest rail station is at Margao. It is 16.6 kilometers from Mobor by the MDR43.

By Road — The Mobor beach is 20.2 kilometers from the Margao city center by the MDR43. Margao or Madgaon is the biggest city in South Goa.

The beach gets its name from the village, which has the same name. It is a small green village with tall trees and many traditional homes. Most of the locals are into fishing or engaged in the travel industry.

The Mobor beach was virtually unknown till the time the luxury hotels began to come up in neighboring Cavelossim. Even to this day, very few tourists know of Mobor, which is why it has been able to retain its pristine and virgin beauty.

The tree line is intact. In fact, the southern section of the beach is entirely free of construction. There are just palm and casurina trees and sand dunes. Beyond this is the confluence of the Sal River and the Arabian Sea. The central portion of the beach has lawns of the two big hotels that run all the way up to the beach. There are very few tourists here, even in the peak tourist season, which is why Mobor is one of the cleanest Goa beaches. For long stretches you may see absolutely nobody. Many foreigners and a few Indian tourists, most of them staying at the two luxury resorts, and a few villas, guest houses, and budget homestays.

The beach has soft golden sand, which is good for walking barefoot. It curves down gently towards the sea. You may see a few fishing boats on the beach and nets being dried or fixed as there is an active fishing community here. Walk up to the boats and take pictures. The Arabian Sea is generally safe for swimming. There are no riptides. Just avoid swimming very close to the confluence or when it is raining heavily.

There are a few shacks on the beach, most of them at the central part close to the two resorts. Sun beds are placed under the trees. You will see tourists relaxing with a drink or food. Many foreign tourists getting a tan, and some Indians as well. Most tourists here are young people. Walk away from the shack areas, and you will have almost the entire beach for yourself. It will be completely secluded.

There are sandy pathways that goes from various places on the beach to the Mobor-Cavelossim Road. Sal River is on the other side with a jetty and several fishing boats. Greenery on the beach and the meandering Sal, essentially two waterfronts on either side, makes Mobor a unique beach in Goa.

The Sal River flows quietly on the other side of the beach. This is Goa’s third biggest river, and the biggest in South Goa. It meets the sea at the neighboring Betul beach. The confluence of the sea and river is a beautiful place. There is a road that leads up to it, or you can also walk down the beach. Cross the river and you can reach the Betul Fort. You can also visit the Betul lighthouse.

You will find some sandbanks on the Sal where you will see birds searching for food. Cross the river to reach the Cutbona Jetty. This is a small but busy port used mostly by fishing boats. A road runs parallel to the jetty where you will see many vehicles that transport the fish to various markets. However, there is no bridge over the river. You have to take a ferry to cross it.

Further up the river, you can visit the Estevam Island, which has almost 100% tree cover. It has a wildlife park, mostly because of the many species of birds here.

Top 5 Things To See And Do At Mobor

While there are shacks on the beach side of Mobor, on the riverfront, and within the village, you will find some restaurants, like The Fishermans Wharf, which is a famous seafood restaurant of Goa, Betty’s Place, and the Riverside. There is also the Bryson Supermarket where you can buy groceries and daily supplies

The sea at Mobor is safe for swimming even for kids. You won’t find any undercurrents or rocks. The beach slopes down gently into the sea.

Local fishermen offer dolphin trips. Ride on a boat for a chance to get intimate with these wonderful creatures. You will see them jumping and playing around. You can even swim with the dolphins if you like. The best time to see dolphins is early in the morning. The 2-hour trip also includes light snacks. Remember to carry towels and wear sun screen. You will be provided life jacket, which is compulsory.

There are half-day or full-day fishing expeditions as well. Learn to catch fish and come back with your catch of the day. You can then have it prepared at a restaurant. You have chance to catch gold fish, snappers, salmons, barramandi, and others.

Places To Visit Near Mobor Beach

The Leela and Holiday Inn are two large upmarket resorts that dominate the hotel scene in Mobor beach. They are both huge 5-star properties with comfortable rooms, swimming pool, playground for kids, banquet facilities, restaurants, tennis courts, and other facilities. There are a few smaller hotels as well.

There are guest houses, bungalows, and luxury villas in Mobor and the neighboring Cavelossim areas. Most of them are on the side of the river or next to the Cevelossim Road. The private luxury villas provide more space per person with complete privacy. The rooms are larger than hotels. Modern luxuries and amenities included! Some villas are right on the river. The Arabian Sea is only a few minutes walking.