Mapusa (called Mapsa by the locals) is the 3 rd largest town of Goa after Panaji and Margao, and the biggest town of North Goa. A town of 39,989 people (2001), Mapusa is 15.9 kilometers from Panaji, the state capital of Goa by the NH 66. It is also close to many famous beaches of North Goa like Vagator, Morjim, Anjuna, and Baga. These beaches are only a few minutes away by road.

There are many tourist attractions around Mapusa like temples and churches. Church of Our Lady of Miracles, Shree Dev Bodgeshwar Temple, Maruti Temple, and the Sri Kalika Temple are all worth visiting. But the main attraction of Mapusa is the Friday market that attracts a large number of tourists in peak season. The Moira River flows east of Mapusa. Also visit The Cube Gallery and see its interesting and intriguing displays, the work of artist and designer Satinder Singh.

Mapusa is a business town, much like Margao of South Goa. There are shops, few offices and commercial establishments, restaurants, cafes, and many homes located at the slope of the small Altinho hill. The town also has hospitals, nursing homes, and a few public gardens. There is a gas station on the Calanhute-Mapusa Road, just before you enter the town, close to the taxi stand.

The Panaji-Mapusa road trip takes about 30 minutes. You can take a bus to the town and then hire a taxi or a two-wheeler motorcycle here to visit the nearby beaches.

The best time to visit is during the winter season between November and February. You will have pleasant weather this time of the year. There is very little rain and humidity. Long hours of pleasant sunshine so you can spend time at the parks, temples, churches, visit the nearby beaches, and see the Friday market without sweating a lot. The summer season will be hot. Temperature will usually hover between 33°C and 35°C on most days. There will also be high humidity, which gets worse during the monsoon (between the middle of June to late August).

How To Reach Mapusa

The Panaji-Mapusa road trip takes about 30 minutes. You can take a bus to the town and then hire a taxi or a two-wheeler motorcycle here to visit the nearby beaches.

The market is open from Monday to Saturday from 9 AM to 6.30-7 PM, but it is the busiest on Friday’s, because the artisans, traders, and local farmers bring their fresh produce on that day, and thus the name – Friday Market. Every Friday, you can buy directly from the producers.

Prices are much cheaper than the resort areas. However, you can still bargain to bring it down even lower. Also remember, the market almost completely shuts down in the afternoons for the siesta or traditional susegad, common in many places in Goa.

The Mapusa market has been a major center for shopping and trading for a long time. In fact, it is said that the town developed later around the business conducted at the market. Traditionally, Goan communities established community farming systems and formed associations. Market day was always very important. The associations brought their produce from the districts.

Visit ‘The Pub’ just opposite to the Friday Market. It looks like a shabby place from outside, but from the inside, the bar is buzzing. The food too is good and value for money. Try the crispy fried sardines here. This will be a perfect place for a quick bit and drink after visiting the market. 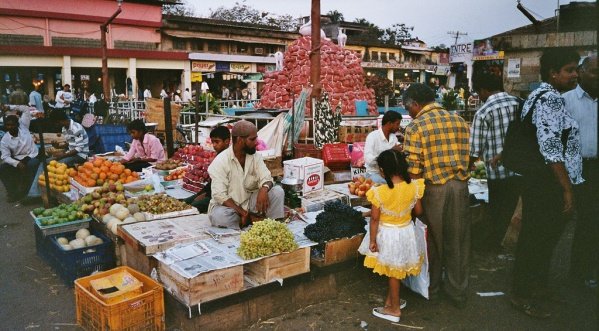